Set in Huntington, West Virginia, Jamie tries to turn the school lunch program away from processed and sugar-rich food into ‘home-cooked’ fresh cooked food. And what a struggle he had. He was met with passive and aggressive resistance at every point along the way. Some of this was obviously manufactured for the camera, but there was also a pervasive ignorance and head-in-the-sand mentality from many influential people in the Huntington community. Whether Jamie Oliver is successful long term remains to be seen.

But I digress. As part of the industry that is Jamie Oliver he publishes a bi-monthly magazine called Jamie. It’s damned good and I have cooked several of his recipes from this publication. You’ll find his homemade baked bean recipe on this site, a family favourite.

I bought some diced lamb from the local butcher and looked for something to make me and my boys. The photos of this dish in the magazine looked so delicious that I had to give it a go – and what’s more I actually had 90 per cent of the ingredients.

This recipe is adapted to suit what I had in the pantry. I also found, on the final taste test, that it was a little bitter so added some lumps of dark cane sugar to smooth the flavour. So, the ingredients are what I cooked, not what Jamie recommends. 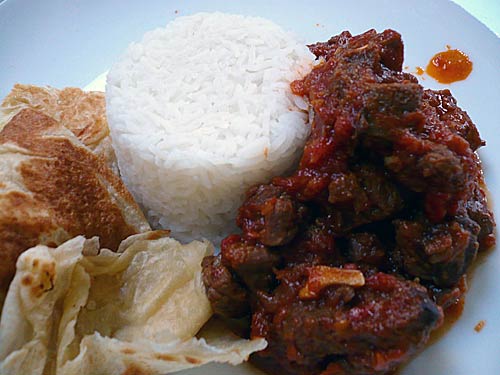 In a mortar and pestle mash the garlic and ginger into a paste and set aside. Or, I reckon you could put both the ginger and garlic through a garlic crusher.

Heat the oil in a saucepan and add the cardamom, cinnamon and onion and fry gently until golden brown.

Add the lamb and fry, stirring occasionally until brown. You’ll find a lot of liquid comes out of the lamb – I reduced this until it was a thick gravy. Add the ginger and garlic paste and fry for a further 10-15 minutes until the dish is dark and aromatic.

Add the coriander, chilli powder and cane sugar. The add the canned tomatoes chopping or mashing them in the pan. Bring to a boil and then simmer for 15-20 minutes until the liquid reduces and the tomato has turned a deep brown.

I served this with rotti bread and plain basmati rice. Everyone loved it and I’m sure it will be cooked many more times in our household.

This site uses Akismet to reduce spam. Learn how your comment data is processed.