I’ve been keen to make my own bacon, or any cured meat for that matter, for quite a long time. So I was envious of Bunny Eats Design when she attempted it and succeeded! And it’s simpler than you think. So, here’s Genie’s blog post on how to make your own bacon. Give it a try. Genie bought her bacon cure off TradeMe – just search for it and there’s plenty to find.

Guest post by Bunny Eats Design, published over there on May 4, 2012.

After reading the book Heat by Bill Buford, I’ve dreamed of curing my own pork. Curing meat uses salt to draw out the moisture and this allows the meat to last much longer. When the apocalypse that we’re all waiting for hits, we might need low tech techniques like these to make our food go further. Maybe. In the meantime, there’s nothing wrong with home made bacon just for fun.

Traditionally, pig slaughter takes place in autumn, after a summer of fattening up and curing begins at this time of year too. The work is generally done outside and needs cooler temperatures to keep the meat happy. Winter is too cold in many parts of the world to work outdoors, so Autumn is the perfect season. Also, in the northern hemisphere, the holiday season follows soon after autumn and there is much appreciation of pork over the festive feast period. Christmas ham anyone?

I’ve always loved the idea of curing/brining my own bacon. I wasn’t sure if I was going to smoke it too since I know nothing about smoke, but from my research, the extra step was well worth it and regarded by bacon curers as a requirement of home made bacon. So, I  decided to attempt smoking my bacon. I’ve never smoked anything. Well, any food.

I bought the largest piece of free range bacon I could find. The Freedom Farm slab of pork belly wasn’t that big at all, I was hoping for a kilo piece but I had to make do with 800 grams. 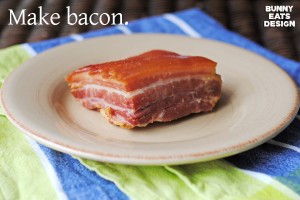 I mixed 1/4 cup of the cure that I procured online, with a 1/4 cup of non-iodised table salt and a 1/8th cup of brown sugar. I rubbed the pork belly all over and shoved it into a ziplock back and chucked it into the fridge. I flipped it once a day and after 2 days, I took it out, drained the liquid that had come out of it, rubbbed more cure into the meat and bagged it into the fridge for another 3 days. I disposed of the bag and cure, washed the pork belly and left it under a slow running tap for one hour. Then I drained the water and put the meat into a sieve and put it into a bowl to catch any drips. I refrigerated this over night. At this stage, this is pretty much cured meat. The next, better stage is smoke.

I don’t have a smoker so I concocted a makeshift stovetop and oven smoker that used a lot of tinfoil, a roasting tray, a drying rack and woodchips.

I cut my pork belly in half and only smoked one half because I wasn’t sure if it would turn out right. 4 hours of smoking did the trick but my technique is far from perfect so I won’t be sharing it until I know what I’m doing.

I really, wish there was more bacon. 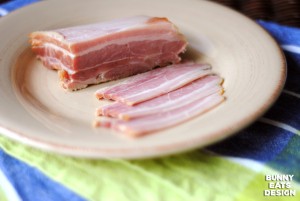 My home made bacon was turned into:

My bacon making tips for next time:

This site uses Akismet to reduce spam. Learn how your comment data is processed.